Every techie’s calling it the next big thing. And why shouldn’t they? Virtual Reality’s total immersion offers incredible opportunities to communicate with customers. While online traders should be especially happy, local traders and the retail world can also gain from this brave new reality.

For decades, VR was just pipedream of developers; If people could fully immerse themselves in other worlds, then we could usher in a digital revolution in our time. This long-sought-after-but-fuzzy vision is now, amazingly, a reality, with market leaders like Google, Apple, Facebook and the electronics manufacturer Samsung already working with the new technology.

What’s more, you already own a VR device. No seriously – the much heralded revolution that we’ve described – well, it’s already happened. Well, you do own a smartphone, don’t you? The screen, you see, can offer a cool introduction to VR. All you need is the right glasses to bring it to life. It was quite a coup for Google back in 2014, who wanted to break down barriers to the new technology, and so developed a cheap bridging product, Google Cardboard. From the official site it costs only only 14.99 USD – from other sellers, naturally, prices vary. For it to work, all you need to do is download the app, slip your smartphone into the cardboard compartment and look through the glasses - easy!

The elegant, collapsible product uses lenses to focus in on the smartphone, limiting vision to two circular areas. The App plays slightly different videos for each eye, creating a 3D effect. The user feels directly involved in the video, whether they’re swimming with a shark in the sea, or at a pop concert, or buying a house.

Google Cardboard’s low price has not only attracted users, but has also encouraged developers to create exciting new programmes for VR. Google’s Vice President of VR, Clay Bavor, announced in January that five million Google Cardboard units were brought into circulation, and over 1,000 VR Apps have been downloaded more than 25 million times from Google Play. To follow-up this success, In May, the new platform Daydream for Mobile was released with a higher-image quality. The partner program for Cardboard will start in Autumn of this year. 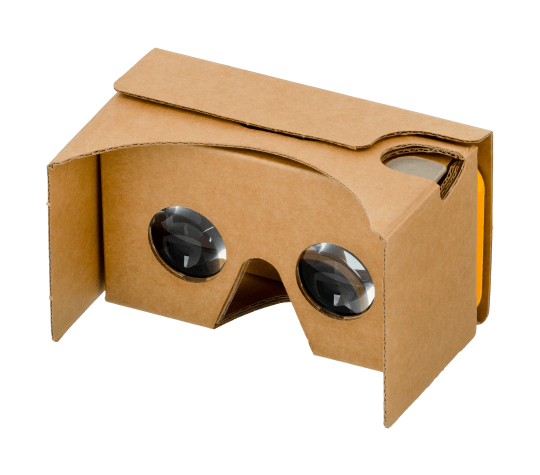 The software development kit (SDK) from Google VR is incidentally available for iOS, as well as Android. That’s a polite way of saying Apple let something slip. It’s not often tech pioneers are caught napping, but on the VR front, Apple definitely was. They’re rapidly catching up, with the Financial Times reporting in January that the company set up a secret research unit with a hundred virtual and augmented reality experts with one clear objective: Beat the competition. Develop a headset that rivals Facebook’s Oculus Rift, or take on Microsoft’s Augmented Reality glasses, Hololens. In the last few months, several of their own prototypes have been developed.

The significance of VR can be read into the business deals done for it: in 2014, Facebook took over Oculus for 2 billion dollars. The headset, Oculus Rift came into the world on the 28th March 2016, with an introductory price of 600 USD, for a much more spend-happy public than the one that bought Google Cardboard for 25 USD.

The tech behind Oculus and Facebook is also present in Samsung’s VR inventions, Samsung Gear VR. The headset, specially designed for Samsung’s Galaxy Smartphone, promises a field view of 96 degrees – which corresponds, in boring terms, to a person sitting 2 meters away from a screen, with a diagonal of almost 4.5 metres.

In addition, an important competitor of Oculus Technology was released by the smartphone manufacturer, HTC: The headset, HTC Vive. Currently, this bit of tech gets praise mainly for its tracking and controlling abilities. Unlike the gamepad-controlled Oculus Rift, the HTC Vive is operated using two controllers with both hands. The tracking system “Lighthouse” detects the user in the physical space and offers them a precisely delineated heatmap in the virtual world.

The chance for traders

VR is a dream for the film and video games industry. But it’s also one for traders and SME owners. The possibilities for online shopping are self-evident. Instead of endless scrolling through product pictures, the customer could easily take a 360 degree stroll through a virtual boutique. With the help of Augmented Reality, users could even try clothes on digitally, to see if they suit the avatar of the user. Obviously, for this to work, it helps to have an avatar close to its real-life owner.

This idea doesn’t just benefit online-giants like Amazon or ASOS, but also smaller online traders. Through total immersion, the same scenario could be played out via real-estate sites or online car dealerships, allowing the user to get a realistic vision of the product.

At the beginning of this year, the Bonial.com Group with their brand kaufDA presented the first version of their VR app for Oculus Rift. Virtual rooms with panoramic views let users immerse themselves in the world of products, where they can view their desired purchases from all sides, and check prices. Favourite products are decided upon in the virtual world, with purchases saved for the retail store visit.

Furthermore, to help users get started in the production of VR content, YouTube has supported 360 degree videos since March. In these, the field of vision is not limited to the conventional perspective. Instead, the viewer can lift the view in virtual reality, and look around left and right. Of course, the necessary 360 degree video cameras and software are required for both content producers and watchers. In April, YouTube also announced live streaming in 360 degree and surround sound.

While VR puts us in a computer-generated environment, Augmented Reality brings virtual objects or digital information almost into our reality. A first ambitious attempt by Google Glass failed, but is expected to take-off in the near-future. Augmented Reality is already an integral part about the app from Yelp. The Monocle feature displays information about companies when they are captured with a mobile phone camera.

The US investment bank Piper Jaffray has compared a forecast on the present state of the VR technology with that of mobile phones 15 years ago. Should this prove correct, virtual and augmented reality should not be neglected by any retailer.

Bild via The Verge/ James Bareham