The Road to Nowhere: How Smartphone Apps Have Eclipsed Car Navigation Systems 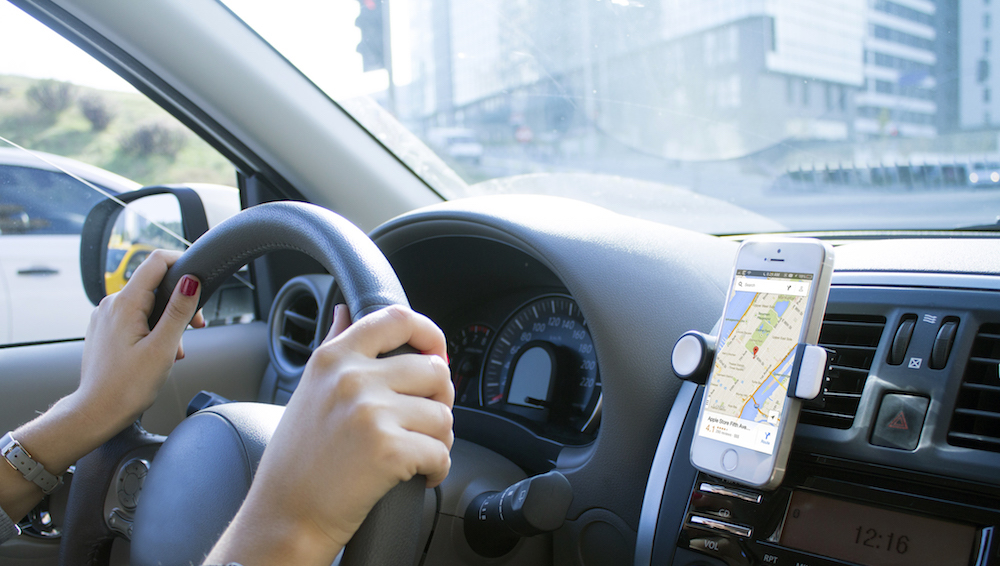 When I was growing up, our navigation system was someone in the passenger seat, unfolding a map large enough to cover the car and squinting to find the right road.

Beginning in the year 2000, when the US opened up public access to GPS satellite location, a market immediately opened for real-time mobile navigation systems. Initially, in-car navigation came in only two types: an expensive, built-in navigation head unit, or a portable standalone device that usually mounted on the dash or suctioned to a window.

Neither solution was fantastic. (And neither has changed much.)

•The built-in version was exorbitantly expensive, difficult to input addresses into, and its map data was out-of-date before it left the factory.
•The portable versions were a complex tangle of cords, tricky (and often costly) to update, and a target for thieves.  But at least they got you where you wanted to go. (And you never had to fold them back into the glovebox.)

Dedicated GPS ruled the day for almost a decade - though not everyone could afford them. Still people paid big dollars to have them installed into their luxury vehicles and kept expectations low.

Until a better solution began to emerge, and the rest of us finally retired our road atlases.

It’s a solution most of us carry in our pockets, today.

That’s because in the mid 2000’s smartphone apps began to leverage GPS, and the game changed entirely. Navigation app Waze first began in 2006. Google Maps took navigation app form in 2009, and Apple Maps was introduced in 2012, introduced along with iOS 6. Along with a few smaller players, these apps began to take over how we navigate.

They also changed it entirely.

Traditional, clunky GPS had mainly stuck to navigating routes to addresses. Some would offer points of interest, but those tended to be locations that were motorist-related (gas, hotel, hospitals and tourism locations) and not local storefronts, such as a boutique coffee shop or hairdresser.

And even then, they were unreliable. According to a New York Times article from February 2018, “In a recent test of a 2015 model-year car, the built-in navigation system had no listing for a winery that has been in business for 15 years. Both Apple Maps and Google Maps found it in a split second.”

Smartphone navigation apps, like Google Maps, Apple Maps and Waze soon took route-finding to a new level - offering useful information and rich data. By using cloud-based information in addition to GPS, they are able to constant update on-demand, giving us real time traffic and now offering smart suggestions that incorporated nearby businesses of all kinds.

Now you could ask your navigation app to find you a local pizza place and immediately be presented with nearby options and the best way to get there during rush hour. You could even click on the listing to order the pizza before you arrived. All from one app.

Apps also offered real time weather hazards, police, obstruction warnings, and even told you where to avoid roadkill or potholes.

And where in-car navigation maps were obsolete before they hit your driveway, smartphone apps were updated in real-time, with vast databases of crowdsourced data to draw from, so you wouldn’t find yourself lost on an unknown road.

Best of all, instead of expensive up-front costs and update fees, these apps were free, or a one time charge that was less than a fancy coffee.

Moreover, Waze even offers user-submitted data, so that users can connect to each other, input hazards, “beep”, and add photos and information on their own favorite locations.

Waze, in fact, is something of an extended social network, and users often prefer it for the warnings it provides about upcoming hazards or police speed traps.

There are other advantages, too.

•Where dedicated, in-car GPS had us tethered to a vehicle, smartphone navigation will let us find our favorite places from a bicycle or on foot.
•Smartphone apps allow you to engage with them before you reach the car, estimating trip timing, finding the best times to depart or planning future trips and reminding yourself when it’s time to go.
•Smartphone apps are in partnership with federal, state and local governments. For example, The Port Authority of New York and New Jersey use Waze for real-time alerts on lane closures or updates related to bridges, tunnels, and roadways. In fact, Waze alone partners with 34 states and the  U.S. Department of Transportation.
•Because most users carry their smartphones constantly - checking them on average once every 12 minutes - they never have to worry about having it available, or inviting thieves to smash your window.
•Most smartphone apps integrate with in-dash multimedia systems, such as Apple CarPlay and Android-compatible systems, and Waze even integrates with Spotify to deliver tunes along with routes.

It’s probably not surprising then, that adoption of these navigation apps has skyrocketed while traditional gps has plummeted. Waze estimates it has more than 80 million users worldwide - its GooglePlay site alone tops more than 100 million downloads. In the U.S., drivers connected with Waze a full nine hours per month - and they posted over 250 million alerts in 2017.

In fact, 90% of smartphone users use their phones to get directions, according to Pew Internet - and that stat is from 2015!

In a recent article on which in-dash navigation system to choose, Consumer Reports went out of its way to add a warning: “Of course, think twice before buying an in-car system, because your smartphone probably has a system that’s just as good and won’t cost you hundreds or thousands of dollars more.”

Garmin, one of the former leaders in the in-car GPS space, began several years ago to diversify into wearables - like fitness trackers - which have driven their revenue growth since the bottom fell out of the navigation business.

This is no surprise. “How do you get someone to pay hundreds of dollars for an inferior product, when most people already have a better one in their pocket?” asked the New York Times, in that same article quoted above. Though in-car navigation systems are still struggling to re-invent themselves and regain relevance, most are still expensive, a luxury add on for most cars - not standard. They have a long way to go and all signs suggest that their eventual solution will be merely to integrate the apps into their dashboards.

The benefits of apps over in-car navigation extends to businesses who are deciding where to focus their location marketing efforts.

•Apps are more up-to-date and likely to include your listings. In fact, Google Maps and Waze are both owned by Google.
•Unlike in-car GPS, apps allow paid geo-located advertising, which allows you to reach customers when they are near you.
•In-car systems lack the ability to go from local search to navigation by simply clicking the “Get Directions” button.
•Apps are more friendly to location-based marketing and voice search, where a driver may request the app to find  a “car wash” and find not only the local options, but additional information, such as other services, gas prices, opening hours, photos,  and more.
•The most successful new in-car dash systems are adopting systems like Android Auto or Apple CarPlay that mirror the phone's applications in the car's computer display screen.

So the next time you hop into an older car, and type your business name into the in-dash GPS with the hope of finding it - don’t worry if it’s not there. Chances are your customers aren’t looking there, anyway.

They have probably already found you on their smartphone app, and are headed your way.

One of our location marketing experts will be available to answer any questions.